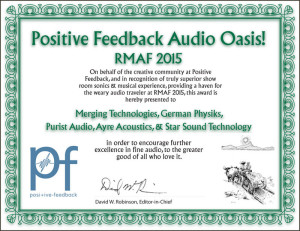 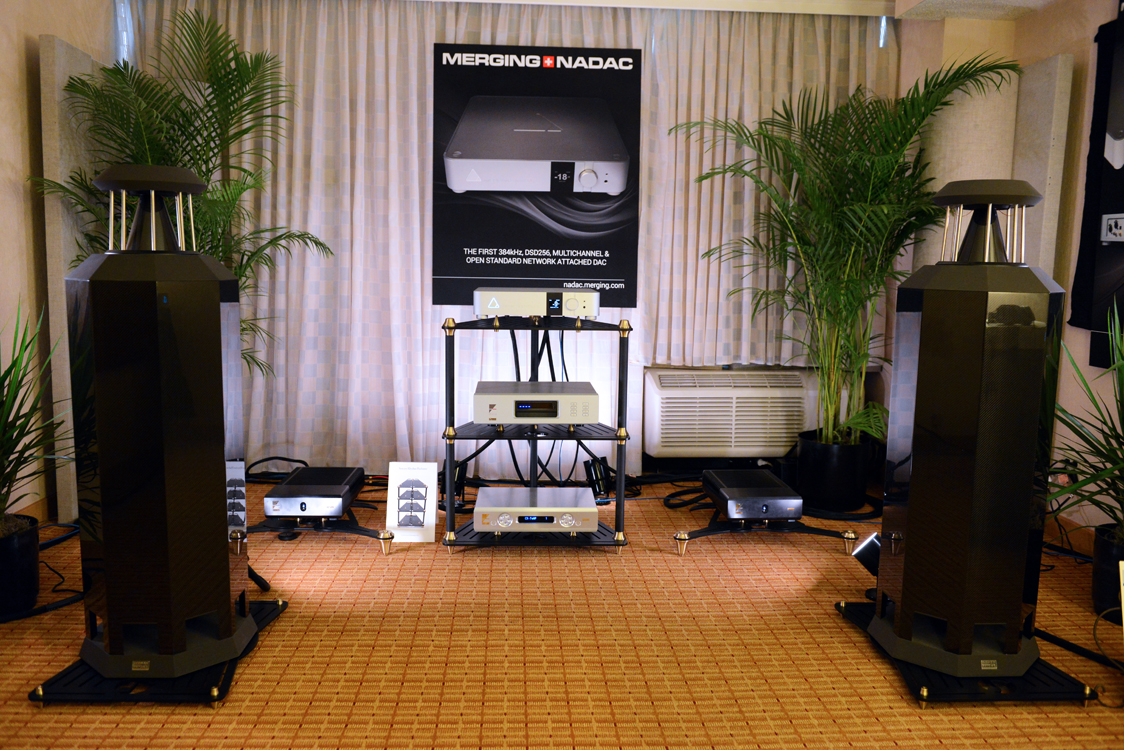 The second Merging Technologies room was altogether different than the On a Higher Note experience, but was likewise entrancing. Featuring the NADAC, with Ayre Acoustics providing the downstream electronics, piped via Purist Audio to the German Physiks omnidirectional speakers, this combination produced music that was immersive and more holographic than usual in stereo rooms.

The NADAC was its usual superb self, with Dominique Brulhart and company providing a mix of DSD recordings in Quad DSD (DSD256) resolution together with some DXD PCM recordings at 352.8 kHz/24-bit. I was struck with how well Charlie Hansen’s Ayre Acoustics equipment sounded in tandem with Jim Aud’s Purist Audio cables; they really lit up the German Physiks Carbon Mk. IV loudspeakers. It has been years since I had heard the German Physics omni’s, but this new carbon fibre design was clearly superior to the earlier work that I knew pretty well. Robert Kelly is obviously on to something here, and the rest of the chain highlighted the excellent qualities of this speaker.

Excellent! Another Audio Oasis! Award winner, to be sure….

At this year’s Rocky Mountain Audio Fest, playing back high-resolution recordings in DSD256 and 24-bit 384kHz formats using the new Merging Technologies NADAC D/A converter enabled us to produce an exceptional sound with the Carbon Mk IV loudspeakers.  One DSD256 violin track in particular left a lot of people speechless, as they had never heard anything so realistic from an audio system.  AV Showrooms made a video when this track was played. The listeners really were left stunned. That is why there are a few seconds of silence after the track finishes.  You can then hear someone say, “That was awesome” and then, Peter Breuninger, who was shooting the video agrees.
_________________________________________________

In another AV Showrooms video from the show, U.S. reviewers Peter Breuninger, Miles Aster and Dr. David Robinson discuss the most interesting products they saw. In the video, Dr. Robinson, talking about the Carbon Mk IVs, says:

“This one really bushwhacked me”.

He went on to say:

“One room which stood out for the right reasons was the German Physiks/Merging Technologies NADAC/Ayre amps, on Sistrum platforms with Purist Audio cables. I always admire the sound of these speakers but here they raised their game further with a combination of hi-rez tracks that sounded spectacularly real. Even sitting close to the left speaker in the front row, you could not quite determine where the music was coming from, it just emerged in the room sort of between but also around the speakers. A solo violin recording privately made by Merging Technologies (I think) was absolutely stunning to my ears with a resolution and timbre so close to the real thing that I felt here is a system I could live with for the long haul. One of the best of show for me.”

On another page Patrick commented:

“What did live up to memory was the German Physiks/Ayre/Merging Technologies room. Now I hogged the sweet spot and enjoyed another listen to that special violin recording they used. Magic. I know some folks might think there is an absence of bass in these but I suspect it only seems so in comparison to the floors of boom on display here at RMAF. A driving bass solo track reveals that the crossoverless German Physiks do bass just fine – tight, articulate, clear.  For those of us who crave timbre and out of the box sonics, these speakers (and let’s be clear, some superb partnering gear and clever set up by Michael Broughton which had the speakers physically exposed but sonically invisible) brought something special to the room. A clear winner for me.”

“Real instruments are recognizable when reproduced but there’s a level beyond recognition that pushes the illusion of presence further up the scale of credibility. Harbeth rooms did that well. Von Schweikert’s too, but the German Physiks room did it best on violin. Of course, that was just the speakers, each had excellent partnering gear and careful set up. I commented a lot on lack of soundstaging in many rooms, the pull of vocals or instruments to one speaker at the expense of the other. Am sure there’s a ton of technology that can work on this but the basic rules of set up cannot be fought and even if they could, sounsdtaging won’t ever replace timbral accuracy as the key for me. And back to that point about resolution:  real unamplified instruments never have that bleeding edge sound you hear in some gear.”

“German Physiks showed its Carbon IV omnidirectional loudspeaker ($31,350/pair) at RMAF, presenting the speaker in a demo system comprised of the Merging Technologies NADAC, an Ayre Acoustics preamp and power amp, with all components connected via Purist Audio Cables. The speaker derives its name, in part, from the fact that it is based a carbon fibre version of the firm’s signature Walsh-type DDD omnidirectional driver and from the fact that its distinctive octagonal-footprint cabinet features carbon fibre sidewalls. Quite frankly, I felt the German Physiks/Merging Technology/Ayre system was one of the two or three best I heard at RMAF; the sound quality was simply breathtaking.” 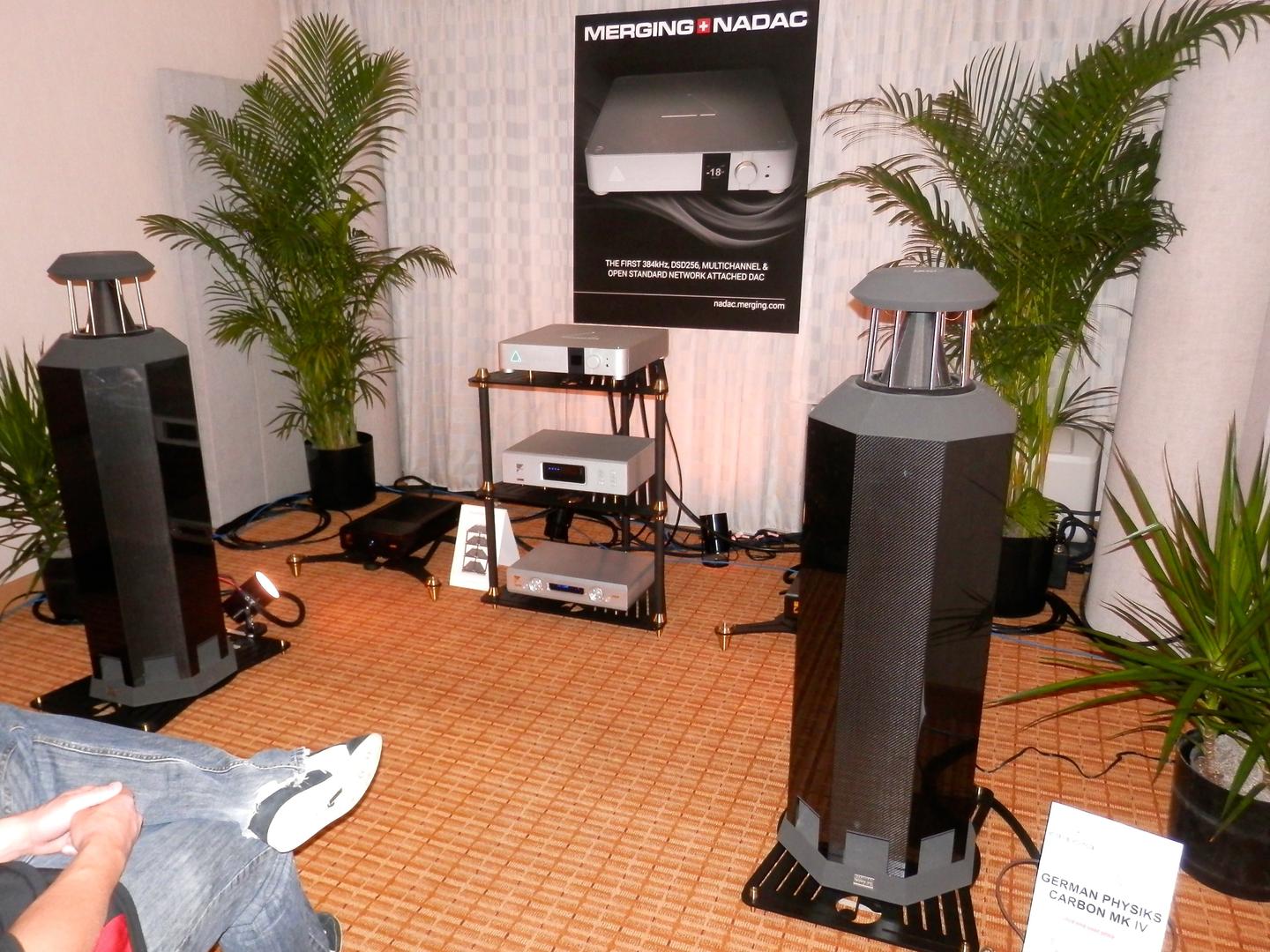 “I have heard German Physiks speakers before, some larger and other smaller than the Carbon IV, but my take on things was that the Carbon IV was not only best all-around speaker I’ve yet heard from German Physiks, but that it was also one of the finest omnidirectional speakers I’ve heard at any price. Omnis can sometimes sound a bit too diffuse for their own good and thus can seem to lose track of small but critical low-level details—especially details that provide spatial and other imaging cues. Happily, though, the Carbon IV did not seem to have these problems; it offered rich, full, and complete delivery of low-level musical information while also doing a remarkable job of conveying a believable sense of place and placement on good recordings.”

In another part of his show report Chris says:

“Merging Technologies’ groundbreaking NADAC (Network Attached DAC) ST2 ($10,500) was matched with an Ayre Acoustics KXR Twenty preamplifier and MX-R Twenty power amplifiers, plus German Physiks Carbon MkIV loudspeaker for what was, hands down, one of the best sounding demo systems I heard at RMAF 2015, regardless of price.”

“I was very taken by the German Physiks Carbon Mk IV ($31,350/pr.), which uses a 12” cone woofer crossed over at 190Hz to its signature carbon-fiber cone DDD driver, all in a new carbon-fiber-reinforced cabinet in an attempt to raise the bar on resolution and dynamics for a system of this size. Sourced with the Ayre CX-7eMP CD Player ($3950), feeding the Merging Technologies NADAC ST12 ($10,500) DAC, preamplification was the Ayre KX-R Twenty ($27,000), amplification was via the Ayre MX-R Twenty monos ($29,500/pr.), and all cabling was Purist Audio Design. The result was a remarkably coherent sound with an enormous yet very well focused sound field.”

“The German Physics Carbon Mk IV at $31,350 per pair is a mature implementation of the unique Walsh driver. The soundstage is one you can walk around in. The ability of the omni driver to elicit detail cohesively is something you need to hear.” “Dennis’ impressions – I, too, noticed strong central images even when standing well off center. The Walsh driver was well balanced from it’s shimmering highs to a hefty bottom end.”

“Robert Kelly who serves as director of German Physiks loudspeakers really knows how to make the model Carbon Mk IV ($31,500) disappear right in front of you. There was also lots of buzz surroundng the new (PCM, Quad-DSD and DXD format capable) Merging Technologies NA-DAC ($10k) fueled by an Ayre CX-7eMP player ($4k) used as a transport. Kelly tuned up some very nice sounding hi-rez files that had Moreno Mitchell scratching his head at the ability this system to simply vanish right before your eyes compliments of Ayre electronics that included the KXR-Twenty pre ($27,500), MX-R amps ($29,500). Equipment racks hardly get the recognition they deserve but Moreno and I noticed the very attractive Audio Points’ Sistrum Isolation Rack and Platforms almost immediately. Our own Norm Luttbeg wrote quite nice things on his experience with these very products (here).”

RMAF 2015: MERGING TECHNOLOGIES AND GERMAN PHYSIKS GETS MY ATTENTION WITH DIGITAL

“It’s not too often that I will raise an unkempt eyebrow over a digital rig.”

But as I stumbled about The Tower at RMAF (where I was sentenced like Quasimodo by Scot Hull), I came across the tell-tale shape of German Physiks speakers in a darkened room with passable jazz playing and I ducked in, ostensibly to rest my weary ass for a few minutes, but in truth, I’ve always been taken with what the company had achieved in an omni-directional design.”

This was the Merging Technologies room and they were playing a mix of high-res and 16/44 digital files through their NADAC ST2 ($10,500 USD) via a MacBook Pro. Ayre was providing power through a pair of MXR-Twenty mono blocks ($29,500 USD) featuring the company’s zero-feedback, fully-balanced circuitry and Double Diamond output stage. The pre-amp was Ayre’s KXR Twenty ($27,500 USD) and CX-7e MP CD player ($3,950 USD). Cabling was provided by Purist Audio Designs and the rack and amp stands were Star Sound Technologies.

“If you haven’t been able to hear a well-designed omni-directional speaker design, you really owe it to yourself to find a dealer who carries some, particularly German Physiks. They do a very neat trick; they disappear into a room very quickly and you don’t need your head in a sweet-spot “head vise” to get great stereo imaging and the deep sound stage many audiophiles crave.” “The NADAC was doing something that I don’t hear very often, which was sound organic. The music was nothing special, just a mix of various jazz titles, all at different sample rates, but it had a very natural flow, with real texture and warmth to it.”

“While my time in the room wasn’t long, it was very refreshing and I won’t soon forget what Merging Technologies has achieved with their NADAC, which was allowing me to enjoy the music and hear past the digital approximation that most non-analog rigs present to my ears.”

“We first saw the Merging Technologies NADAC ($10,000 stereo, $11,500 multichannel-8) back at CES 2015 and the buzz that was buzzing then has only gotten louder. Merging Technologies had to hold a rock, paper, scissors death match at RMAF 2015 to keep hi-fi writers from offing each other to get the first review sample (kidding). The most obvious technological NADAC stand-out has to be its RJ45 Ethernet input (RAVENNA/AES67) which promises transmission accuracy and, well, great sound.

“Merging hooked up with Ayre and German Physics in room 1025 and the sound, even off axis, was warm and enveloping. I’m in the queue (and the witness protection program) for a review sample and look forward to some real NADAC listening time. I’ll also talk about the NADAC’s multichannel chops, heard in another room, soon.”