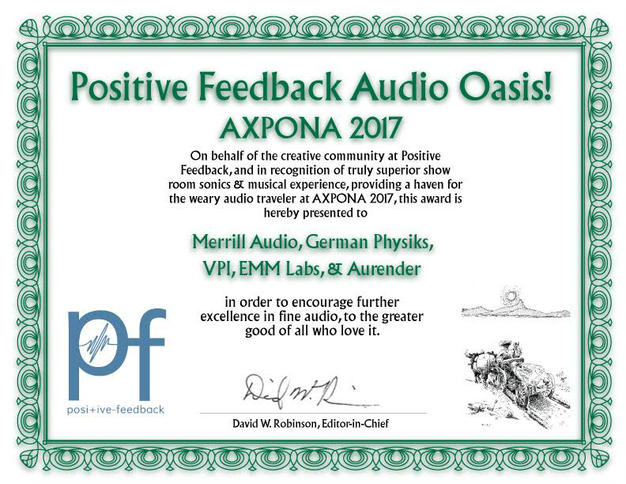 Positive Feedback magazine’s editor Dr. David Robinson was so impressed with what heard in our room that he gave us one of his magazine’s prestigious Audio Oasis Awards. Commenting on this in the magazine he wrote:

“In the very impressive Merrill Audio/German Physiks/VPI/EMM Labs/Aurender room I had reason to praise my last encounter with the folks from Merrill Audio and German Physiks at last year’s THE Show. The performance of the Merrill gear with the German Physiks HRS-130 omnidirectional speaker really impressed me, and resulted in an Audio Oasis! Award in 2016, as you can read HERE.

This system is really stacked!

Once again, the holographic magic that I had heard last year was powerfully in evidence this year. I am quite taken by the very best omnidirectional designs that I have heard, and the Merrill electronics really synergizes well with the German Physiks.

Once again, one of my Audio Oasis! Awards is just begging to be given here. Done!” 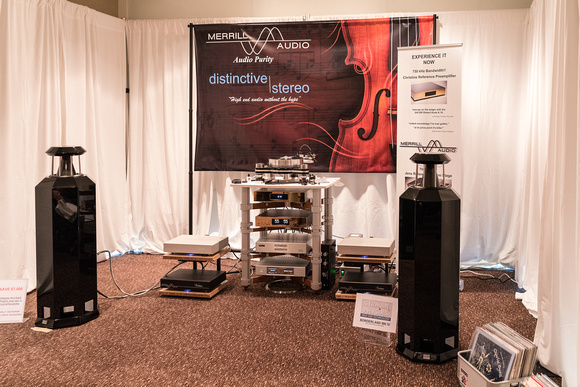 “On the bottom floor, German Physiks was showing its $36.5k floorstander Borderland Mk IV with GP’s remarkable DDD (Dicks Dipole Driver) omnidirectional bending-wave driver coupled to a conventional 12” woofer. The Borderlandwas driven by Merrill Audio electronics (Veritas monoblocks, Christine Reference Aurender N10 linestage, phonostage), and sourced by a VPI Reference Avenger turntable, Jens EMM Labs DAc2X server, and Struder 810 reel-to-reel tape deck, with all wiring from Merrill Audio. To put it plainly, the sound here was very damn good, with simply lovely timbre on a Bösendorfer grand, and an equally lovely sense of enveloping space. This was a better presentation than what I’ve heard in the past from GP, blessed with the seamless coherence of the DDD but with tighter imaging in the mids, terrific transient response and ambience retrieval in the treble, and very good integration and sock on the bottom. It wasn’t a direct-radiator sound but it wasn’t unfocused, bright, or ill defined, either. Terrific on Rimsky Korsakov and equally wonderful on Doctor John and Odetta’s version of “Brother Can You Spare a Dime,” this was my first Best of Show contender. I made a note that I should come back, but, of course, I didn’t.”

Peter Breuninger of AV Showrooms visited our room to video the system and interview Laurence Borden, President of our US distributor, Distinctive Stereo. After listening to the Borderlands Peter said:

“Larry that was wonderful. The German Physiks speakers, I haven’t heard them for 2 years and that threw a holographic sound stage that was simply enveloping…”there are other omnidirectional speakers on the market but they don’t do this, because these speakers image and that’s the difference between these and the other guys. “

“… this was I think the fifth time I have got gooseflesh at the show today. It was wonderful. The detail was there, the body of Anne’s voice was there, the cello was just exquisite…”

“Distinctive Stereo owner Larry Borden (yes, that Larry Borden), showed up in grand style at this year’s AXPONA. Handling all U.S. sales on German Physiks, which includes the awe- inspiring Borderland Mk IV ($36,500). Merrill Audio’s Veritas mono amps ($12k), Christine pre ($12,400) and Jens phono stage ($15,500) complimented a nice front end that featured the VPI Reference Avenger turntable with JMW 12″ arm and Lyra Delos cartridge ($26,500). I’ve always been a fan of German Physiks and here again was a perfect example as to why: the sound is open, you can sit anywhere in the room and get the same focus as you would in the sweet spot. The low-end is rich, quick and goes deep only when needed.”

“In the room shared by Merrill Audio and Distinctive Stereo, the new omnidirectional German Physiks Borderland Mk IV loudspeakers ($36,500/pair), mated with Merrill Audio’s Veritas monoblocks ($12,000/pair), Christine Reference line-stage preamplifier ($12,400), and Jens phono preamplifier ($15,449) produced a fine midrange and slightly hot top end. There was much beauty on an LP of Ray Brown and Laurindo Almeida, thanks in no small part to the VPI Reference Avenger turntable with Magnetic Drive ($23,000) outfitted with VPI JMW 12″ 3- D printed arm ($1500) and Lyra Delos cartridge ($1995), but the leading edge of the guitar strings was a bit over-emphasized.”