Dr. David Robinson, the editor of Positive Feedback gives Audio Oasis awards to rooms at shows that he thinks are especially good. This is our second Audio Oasis award. The first was last year at the Rocky Mountain Audio Fest in Denver. 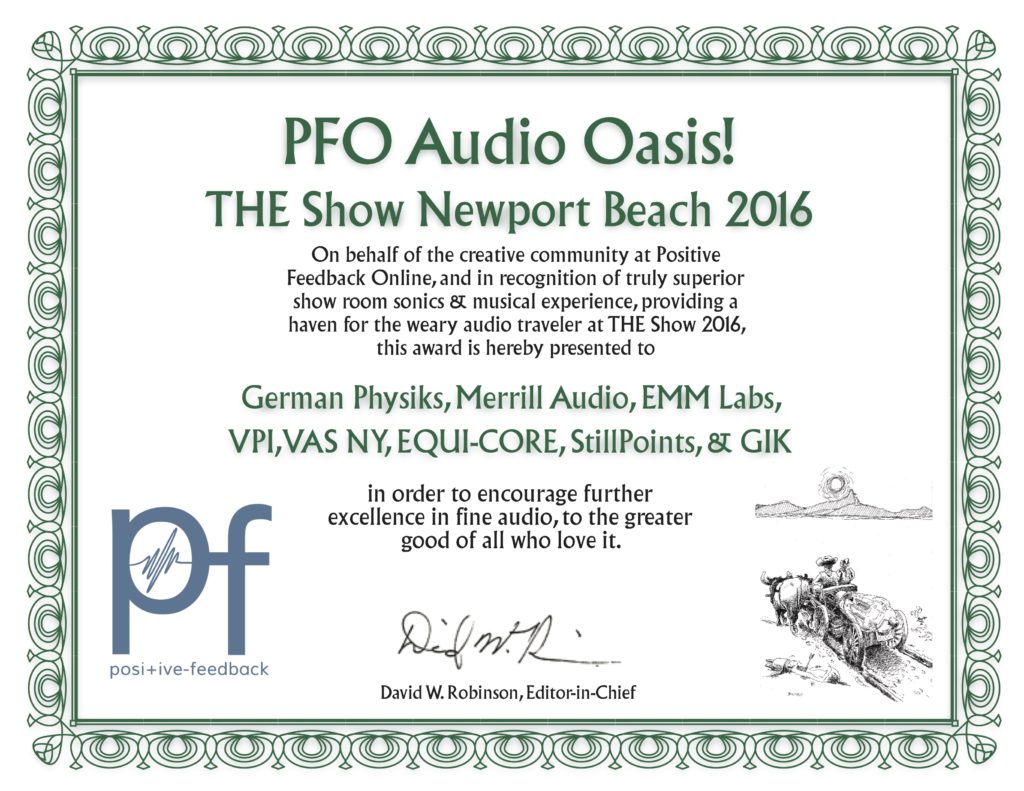 In his comments about our room Dr. Robinson wrote:

“I’ve heard the German Physiks speakers before, but it had been a number of years ago at Scott Robertson’s listening room. The sound there was promising, but nowhere near the performance of this latest iteration GP speaker design, expressed in carbon fiber, and driven by the Merrill Audio electronics and the VPI Avenger turntable. Zounds! The HRS-130’s were not just somewhat better; they were way better! By far the best that I’ve ever heard German Physiks sound! The sense of the holographic and authoritative presence of the music was really noteworthy, and I found myself compelled by the musicality and soundstaging of the system. In fact, I stayed longer than I expected, bemused by the significant gains over my earlier experience with German Physiks. They had clearly improved their designs, but Merrill Audio was just as obviously showing its stuff.”

“Great sound and real mojo in this room, and an Audio Oasis! Award to all involved!”

“We all know that treating room acoustics is key and GIK does an outstanding job. Then we have the VPI Avenger Signature turntable, which we all know is truly remarkable. You add in Merrill Audio amplification and the always-impressive German Physiks speakers and the results are extemporary! A completely holographic soundscape. i’m not taking just your normal nice imaging, we’re getting into the aural equivalent of virtual reality here folks!”

“And oh what impressive speakers they are as the HRS-130 uses a single carbon fiber German Physiks DDD driver mounted on top of a slim, floor standing cabinet. There is a downward-firing 10″ woofer within the base of the cabinet. Together, they deliver a dazzling three-dimensional stereo image that is easily akin to virtual reality and not your typical front-of-room soundstage. Their DDD driver is cone-shaped and has a special voice coil/magnet assembly that serves as the actuator. While typical mainstream piston drivers have the entire cone move to produce sound, the DDD driver has the open end of the cone terminated by a rubber suspension and is semi-rigidly attached to the driver chassis. Motion of the voice coil causes soundwaves to travel from the top of the cone down to the open end. This occurs because unlike the piston driver, the DDD driver cone is made from a very light and flexible foil that is made of 0.15 mm thick carbon fiber. Very tweak stuff here!” 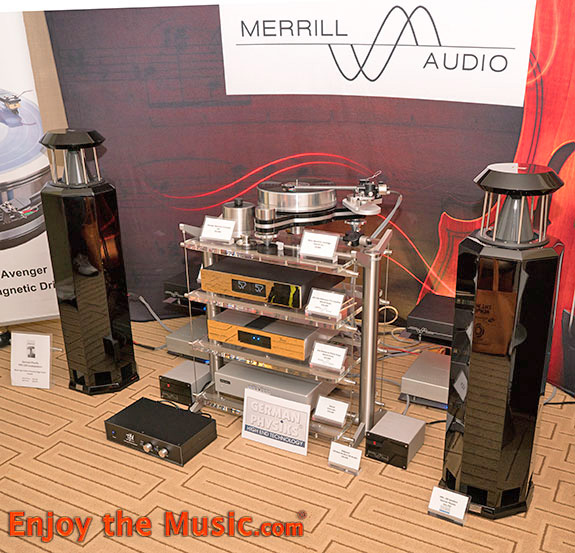 “Of course no speaker, even those by German Physiks, lives ‘alone’ and so here we have an entire system that is far above your typical high-end variety. As best i can tell, every company has earned many awards, so put them all together and, you guessed it, another award (this time from Enjoy the Music.com). The sound was captivating, smooth, and immersive. If you plan to get into VR and want a system to match the visual cues, VPI Industries, EMM Labs, Merrill Audio, German Physiks, Stillpoints, and GIK Acoustics is a leading combination!” 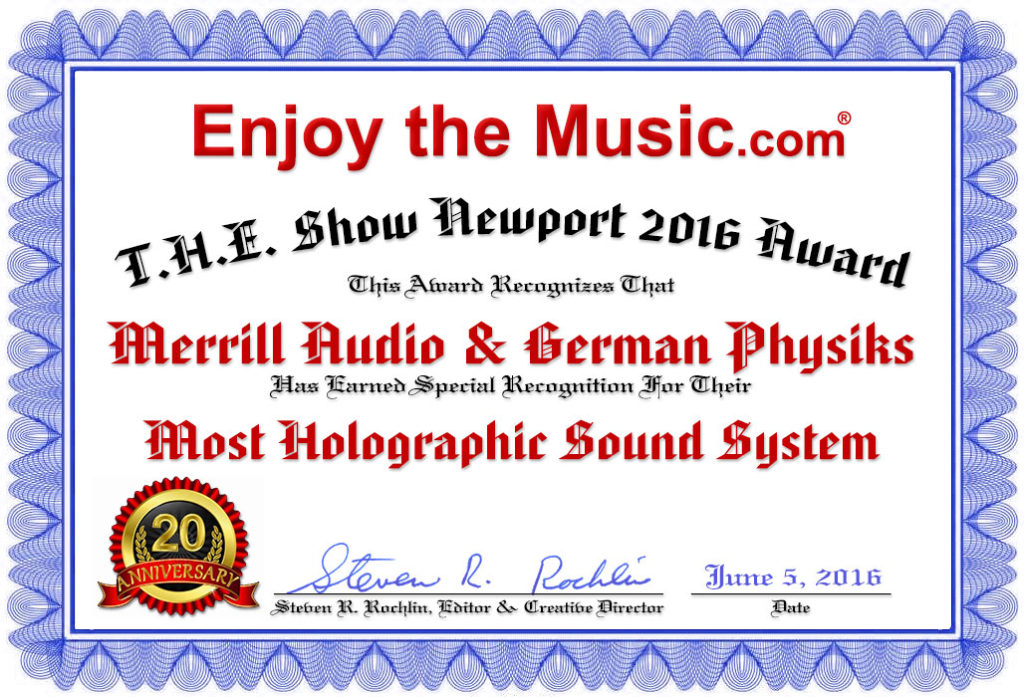 In this video review of the show, Peter Breuninger of AV Showrooms and Dr. David Robinson of Positive Feedback discuss rooms that they regarded as outstanding. Dr. Robinson commented on our room with our HRS-130 loudspeakers, Merrill Audio electronics and VPI turntable, “Man, this is the best I have ever heard them sound. If you want your room full of music and sounding really great the combination of Merrill with German Physiks was fantastic.” 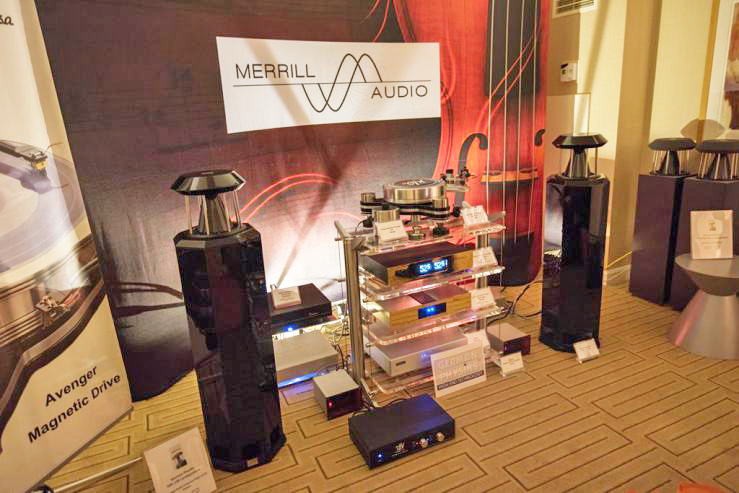 “It was late in the day, and I returned again to the fabulous Merrill Audio room at T.H.E. Show 2016. Merrill Wettasinghe dropped the needle on a VPI Avenger Signature turntable, and I could watch the smiles appear across the room.”

“Hey, why am I hearing instruments behind the speakers???”, one attendee called out. I smiled. This attendee had just experienced a beautifully designed audio system, that was re-creating music with a 3D / holographic like feel. It was engaging, detailed, fast & dynamic, musical with beautiful midrange…. flat out delicious…

”Commenting specifically on the HRS-130s, “They reminded me of fabulous holographic sound I hadheard from MBL in the past, but in a much more compact form factor.”

“Also very much a contender, German Physiks HRS-130 Merrill Audio 4 showed its $22,750 with carbon-fiber Dicks Dipole Driver coupled to a new 10″ woofer, driven by Merrill Audio electronics. Dark and sweet in tone color, the HRS-130 had a boxless three-dimensionality that made for a great disappearing act on my Taj Mahal LP. This was, by far, the best I’ve heard any German Physiks speaker sound at a trade show.”

“I thought the German Physiks sounded transparent, natural, open and spacious. I liked them a lot!

It is interesting to contrast the German Physiks speakers with the flat bending wave driver of the extremely well-made and expensive Goebel High End Epoque Fine, which is not omnidirectional, and the MBL 116F, a completely different driver technology, but which is omni- directional.

I think the German Physiks speakers represent pretty good value for the money. You could combine them with a pair of REL or JL Audio subwoofers and have a pretty fantastic system at not a crazy price.”